It was the biggest share of income clustered at the very top of the distribution scale since 1929.
Richard Rubin  May 27, 2015 — reprinted here from Bloomberg Politics News

The top 0.01 percent of Americans — fewer than 14,000 households — received 5.6 percent of adjusted gross income in 2012, according to data released Wednesday by the IRS that underscore the increasing concentration of income.
It was the biggest share of income clustered at the very top of the distribution scale since 2007. Those in that group had a minimum income of $12.1 million, up from the $8.8 million it took to reach that club in 2011.
An even more exclusive club — the top 0.001 percent — also had its best year since 2007.
“The middle class really has stagnated.”  Harry Stein 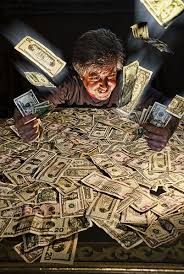 The average tax rate of that group — with a minimum income of $62.1 million — was 17.6 percent. That’s lower than the average rate for the top 10 percent of the U.S. population, a demonstration of the power of preferential tax rates on investment income.
The Internal Revenue Service data provide fodder for the 2016 presidential campaign, with candidates from both parties searching for policies that would reduce income inequality.
Measured in inflation-adjusted dollars, the threshold needed to be in the top 50 percent of the income distribution declined from 2003 to 2012.
“The middle class really has stagnated,” said Harry Stein, director of fiscal policy at the Center for American Progress, a Washington group aligned with Democrats. “You see people at the top doing very well, and it’s not trickling down to anybody else.”
Unusual Situation
High earners faced an unusual tax situation in 2012, because it was the end of the 15 percent top rate on capital gains and dividends. The increase to 23.8 percent on Jan. 1, 2013, prompted many high earners to sell appreciated assets before the deadline and take advantage of the lower rates.
The IRS report also shows how the U.S. tax system remains broadly progressive — meaning those with higher incomes pay higher tax rates. The top 3 percent of households, who received 30.9 percent of adjusted gross income, paid more than half of individual income taxes. And that was before tax increases for top earners took effect in 2013.
Because of tax credits that operate as wage supports, relatively few households in the lower half of the income distribution pay income taxes. The top 50 percent of households received 89 percent of the income and paid 97 percent of the income taxes.
Payroll taxes and state taxes are typically regressive and counteract the leveling effect of the federal income tax.  Income Inequality  and PDF of report here