In an op-ed published by Forbes last week, a pro-biotechnology mouthpiece who used to work for the tobacco industry wrote a provocative piece arguing that a recent U.S. Supreme Court decision imperiled the constitutionality of mandatory genetically engineered food labeling. The claim is flat out wrong and shows no understanding of constitutional law or the issue of labeling of genetically engineered foods. Before rebutting it, some context is helpful.

Right now Americans in every state are working to secure labeling for genetically engineered (GE) foods, which have been subject to significant controversy since their introduction in 1996.Polls regularly show that over 90% of Americans support their mandatory labeling. Unfortunately, unlike sixty-four countries across the globe—including all of the Europe Union, Japan, New Zealand, Australia, Brazil, Russia, China, and many others—the United States has so far declined to require labeling for genetically engineered foods, leaving the public in the dark about whether the foods we buy are transgenic.

What is driving this nationwide outcry for labeling? Consumers are becoming more aware that while few whole foods are genetically engineered, a substantial majority of processed foods are now produced with genetic engineering. The public recognizes that having thousands of processed foods produced with genetic engineering, yet unlabeled, is deceptive, or at best confusing, to consumers.

Further, Americans are increasingly aware of the risks and negative impacts of genetically engineered crops, correctly seeing through several decades of myths that were carefully constructed by agrochemical companies to promote their products. On the human health side, the public is realizing that the U.S. Food and Drug Administration (FDA) does not actually test the food safety of engineered foods or “approve” them; rather, it has confidential meetings with industry in which it merely reviews the industry’s own testing—and even that is voluntary. Americans are also realizing that no long-term or epidemiological studies in the United States have examined the safety of human consumption of genetically engineered foods, and that without labeling, there is no accountability or traceability to link such foods to proliferating public health problems.

On the environmental side, people are recognizing that genetically engineered crops are a key cog of inherently unsustainable industrial agriculture, and cause significant adverse environmental impacts. Genetically engineered crops are essentially a pesticide-promoting technology: They are overwhelmingly engineered to be resistant to pesticides or produce pesticides, and consequently have dramatically increased overall pesticide output into our environment. Monsanto’s Roundup Ready varieties, resistant to glyphosate, have made glyphosate the most used pesticide in history, with over 280 million pounds applied in U.S. agriculture in 2012 alone. Earlier this year, the World Health Organization’s International Agency for Research on Cancer concluded that glyphosate is probably carcinogenic to humans. 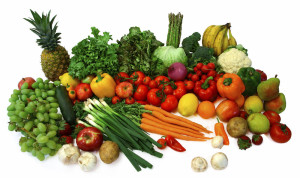 On the agricultural side, transgenic contamination of traditional crops from engineered cropshas caused U.S. farmers billions of dollars in market losses. And the widespread adoption of crops engineered for pesticide resistance has proliferated an epidemic of resistant “superweeds” now covering more than 60 million acres of U.S. farmland.

Juxtaposed against these risks and impacts, the U.S. public is discovering that industry’s hype is false. Namely, despite billions of dollars in research and nearly two decades of commercialization, there are no crops that are engineered to increase crop yields, reduce world hunger, or mitigate global warming; instead, the agrochemical companies that engineer crops have largely succeeded in making these crops resistant to their own products—pesticides. Nor is there any “consensus” that such foods are safe.

For these reasons, into the federal breach, state-required labeling efforts have proliferated, in the venerable “states-as-laboratories” tradition of American federalism. Overall over 30 states in 2014-2015 introduced labeling bills. Connecticut and Maine passed labeling laws in 2013, albeit with clauses tying their effective dates to similar laws in other states, and in May 2014, Vermont became the first state to pass a stand-alone labeling law, which goes into effect in July 2016. And despite spending over $100 million dollars, crushing election spending records,biotech industry has also barely beaten back three state ballot initiatives, in California (2012),Washington (2013), and Oregon (2014), by increasingly narrow 51%-49% margins (Oregon lost by 812 votes, total). 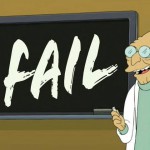 Industry immediately challenged the Vermont GE labeling law, Act 120, seeking an injunction stopping its implementation, but after a year of litigation, in May of this year the Federal District Court for the District of Vermont resoundingly rejected their arguments, upholding the law. The Court agreed with what many labeling supporters have argued for years, concluding that state labeling was not preempted by federal law, that it did not impermissibly interfere with interstate commerce, and that food manufacturers did not have any First Amendment right to keep consumers in the dark about whether their food is genetically engineered. The Court found the reasons Vermont gave for the mandated disclosure labeling—those described above,promoting public health and environment protection, and preventing consumer confusion and deception—were substantial state interests to support requiring labeling. Industry appealed, with briefing over this summer and the Second Circuit Court of Appeals set to hear argument on October 8 in New York City.

Meanwhile, the chemical industry and “Big Food” have continued to pour millions into their assault on States’ Rights and the People’s Right to Know in Washington, DC, making their top priority legislation that would prohibit all state labeling (and any oversight of genetically engineered crop production), known as the “Denying Americans The Right to Know” or DARK Act.  It passed the House of Representatives in July, and is headed for a Senate showdown this fall. 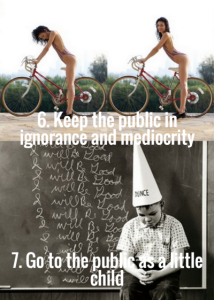 And the industry’s onslaught has been in the media too: following the tobacco industry playbook, Big Food and agrochemical companies deliberately mislead the public on the factsabout genetically engineered crops by spending hundreds of millions of dollars, creating front groups, and paying for the help of neutral-appearing academics. Among other scare-tactics is the claim that labeling will increase food prices, which has now been debunked by independent studies by Consumer Reports.

The decision Reed v. Town of Gilbert, Arizonadescribed in the Forbes article received little media attention. Like many towns, the town of Gilbert, Arizona had passed a code prohibiting the display of outdoor signs without a permit, while exempting several sign categories. Applying the code, the town cited a local church for posting signs about the time and place of their weekly service, but based on the code’s exceptions, other types of signs, such as election signs, were not similarly ticketed. The church successfully challenged the ordinance as violating of their 1st Amendment Freedom of Speech rights. Reversing the lower court decision, Justice Thomas’s opinion striking down the ordinance explained that the town’s sign code was a “content-based” speech restriction, and thus subject to the highest level of 1st Amendment judicial scrutiny, strict scrutiny, which it failed.

The level of judicial scrutiny, or how closely the court will examine a law, is often the critical question in in free speech cases. Strict scrutiny requires a government to show that its restriction on speech furthers a compelling governmental interest, and is narrowly tailored to achieve that interest. Gilbert offered the aesthetic appeal of curbsides and traffic safety for interests. The court found these interests too insufficient and too under inclusive in their application in the sign code to survive strict scrutiny. Justices Breyer, Ginsberg, and Kagan concurred only in the judgement and wrote separately, explaining that while Gilbert’s sign law would fail under any test (noting that “does not pass strict scrutiny, intermediate scrutiny, or even the laugh test”), they disagreed with Justice Thomas’s broad language of when and how strict scrutiny was the appropriate standard. 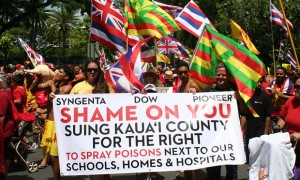 With even a cursory understanding of these facts, attempts to apply this case to the GE labeling context quickly fall apart. The first thing to understand — that is not present in Reed, nor ever mentioned in the Forbes piece—is that commercial speech, like consumer product labeling, is fundamentally different than other forms of traditionally protected speech, like political or religious speech. Commercial speech is a lesser form of speech, generally entitled to less protection; in fact, until 1978, commercial speech was not protected under the First Amendment at all. The Supreme Court has subsequently explained that the “extension of First Amendment protection to commercial speech is justified principally by the value to consumers of the information such speech provides,” not any inherent constitutional rights of manufacturers. As a consequence, laws regarding commercial speech do not receive strict scrutiny review, instead courts apply lesser burdens on governments in such circumstances.

The second major doctrinal point is the difference between a speech prohibition, like the sign postings in Reed, and a speech disclosure, like product labeling. This is also entirely absent from the Forbes piece. In speech doctrine there are material differences between disclosure requirements and prohibitions, with prohibitions having more 1st Amendment protection, for obvious reasons: any interests affected by a disclosure are substantially weaker than those suppressed, particularly in the commercial speech context, where the whole point of the constitutional protection is the value to consumers that speech provides.  Thus a company’s interests in “not providing any particular factual information” are merely “minimal.” Balanced against that are the many substantial reasons in favor of labeling discussed above—health, environment, and preventing consumer deception and confusion—all of which courts have long held to be substantial governmental interests for purposes of mandated product disclosures. 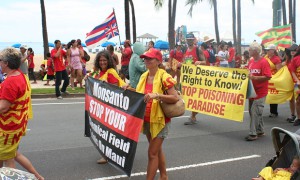 Pesticides Legality Protested in Waimea Hawaii near schools and hospital.

In short, it is difficult to imagine that forty years of commercial speech precedent would be implicitly overturned by a non-commercial speech case, without the Court even mentioning the sea-change it was making. There is not a single case in which a court has found a commercial disclosure, like a product label, to be “content based” and thus subject to strict scrutiny. Based on the position presented by the Forbes piece, all kinds of commercial product labeling requirements would be potentially be struck down, because all factual disclosure requirements require specific content. However, that doesn’t mean they are “content-based” for purposes of strict scrutiny, and Reed does not say otherwise. It is extremely unlikely that the Supreme Court would hide such an elephant in such a mouse hole.

George Kimbrell is a senior attorney at the Center for Food Safety.