Lives are being trashed by klepto-remuneration: theft through excess rewards to rapacious bosses, instead of productive workers.

There is an inverse relationship between utility and reward. The most lucrative, prestigious jobs tend to cause the greatest harm. The most useful productive workers tend to be paid least and treated worst.

I was reminded of this while listening last week to a care worker describing her job. Carole’s company gives her a rota of, er, three half-hour visits an hour. It takes no account of the time required to travel between jobs, and doesn’t pay her for it either, which means she makes less than the minimum wage. During the few minutes she spends with a client, she may have to get them out of bed, help them on the toilet, wash them, dress them, make breakfast and give them their medicines. If she ever gets a break, she told the BBC radio program You and Yours, she spends it with her clients. For some, she is the only person they see all day.

We’re treating soil like dirt. It’s a fatal mistake, as our lives depend on it

Is there more difficult or worthwhile employment? Yet she is paid in criticism and insults as well as pennies. She is shouted at by family members for being late and not spending enough time with each client, then upbraided by the company because of the complaints it receives. Her profession is assailed in the media as the problems created by the corporate model are blamed on the workers. “I love going to people; I love helping them, but the constant criticism is depressing,” she says. “It’s like always being in the wrong.”

Let’s imagine the lives of those who own or run the company. We have to imagine it because, for good reasons, neither the care worker’s real name nor the company she works for were revealed. The more costs and corners they cut, the more profitable their business will be. In other words, the less they care, the better they will do. The perfect chief executive, from the point of view of shareholders, is a fully fledged sociopath.

Such people will soon become very rich. They will be praised by the government as wealth creators. If they donate enough money to party funds, they have a high chance of becoming peers of the realm. Gushing profiles in the press will commend their entrepreneurial chutzpah and flair.

They’ll acquire a wide investment portfolio, perhaps including a few properties, so that – even if they cease to do anything resembling work – they can continue living off the labour 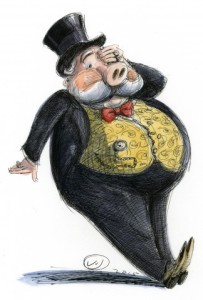 of people such as Carole as she struggles to pay extortionate rents. Their descendants, perhaps for many generations, need never take a job of the kind she does.

Care workers function as a human loom, shuttling from one home to another, stitching the social fabric back together while many of their employers and shareholders, and government ministers, slash blindly at the cloth, downsizing, outsourcing and deregulating in the cause of profit.

It doesn’t matter how many times the myth of meritocracy is debunked. It keeps re-emerging, as you can see in the current election campaign. How else, after all, can the government justify stupendous inequality?

One of the most painful lessons a young adult learns is that the wrong traits are rewarded. We celebrate originality and courage, but those who rise to the top are often conformists and sycophants. We are taught that cheats never prosper, yet the country is run by spivs. A study testing British senior managers and chief executives found that on certain indicators of psychopathy their scores exceeded those of patients diagnosed with psychopathic personality disorders in the Broadmoor special hospital.

If you possess the one indispensable skill – battering and blustering your way to the top – incompetence in other areas is no impediment. The former Hewlett-Packard chief executive Carly Fiorina features prominently on lists of the worst US bosses: quite an achievement when you consider the competition. She fired 30,000 workers in the name of efficiency yet oversaw a halving of the company’s stock price. Morale and communication became so bad that she was booed at company meetings. She was forced out, with a $42m severance package. Where is she now? About to launch her campaign as presidential candidate for the Republican party, where, apparently, she is considered a serious contender. It’s the Mitt Romney story all over again.

At university I watched in horror as the grand plans of my ambitious friends dissolved. It took them about a minute, on walking into the corporate recruitment fair, to see that the careers they had pictured – working for Oxfam, becoming a photographer, defending the living world – paid about one fiftieth of what they might earn in the City. They all swore they would leave to follow their dreams after two or three years of making money; none did. They soon adjusted their morality to their circumstances. One, a firebrand who wanted to nationalise the banks and overthrow capitalism, plunged first into banking, then into politics. Claire Perry now sits on the frontbench of the Conservative party.Flinch once, at the beginning of your career, and they will have you for life. The world is wrecked by clever young people making apparently sensible choices.

The inverse relationship doesn’t always hold. There are plenty of useless, badly paid jobs, and a few useful, well-paid jobs. But surgeons and film directors are greatly outnumbered by corporate lawyers, lobbyists, advertisers, management consultants, financiers and parasitic bosses consuming the utility their workers provide. As the pay gap widens – chief executives in the UK took 60 times as much as the average worker in the 1990s and 180 times as much today – the uselessness ratio is going through the roof I propose a name for this phenomenon: klepto-remuneration.

There is no end to this theft except robust government intervention: a redistribution of wages through maximum ratios and enhanced taxation. But this won’t happen until we challenge the infrastructure of justification, built so carefully by politicians and the press. Our lives are damaged not by the undeserving poor but by the undeserving rich.

reprinted here from The Guardian, in London.